What it means is that if you are trying to convert value from datetime2 to time or from tinyint to int, SQL Server will automatically convert (implicit conversation) for you. However, if you are attempting to convert timestamp to smalldatetime or datetime to int you will need to explicitely convert them using either CAST or CONVERT function as well appropriate parameters. 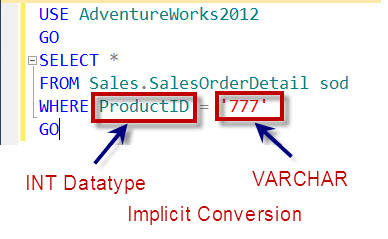 You can see from above example that how we need both of the types of conversion in different situation. There are so many different datatypes and it is humanly impossible to know which datatype require implicit and which require explicit conversion. Additionally there are cases when the conversion is not possible as well.

Microsoft have published a chart where the grid displays various conversion possibilities as well a quick guide.