Here is the question received just this morning.

Our application is much different than other application you might have come across. In simple words, I would like to call it Asynchronous Updated Application. We need your quick opinion about one of the situation which we are facing.

From business side: We have bidding system (similar to eBay but not exactly) and where multiple parties bid on one item, during the last few minutes of bidding many parties try to bid at the same time with the same price. When they hit submit, we would like to check if the original data which they retrieved is changed or not. If the original data which they have retrieved is the same, we will accept their new proposed price. If original data are changed, they will have to resubmit the data with new price.

From technical side: We have a row which we retrieve in our application. Multiple users are retrieving the same row. Some of the users will update the value of the row and submit. However, only the very first user should be allowed to update the row and remaining all the users will have to re-fetch the row and updated it once again. We do not want to lock any record as that will create other problems.

Do you have any solution for this kind of situation?”

I believe there is good chance that we can use timestamp datatype in this kind of application. Before we continue let us see following simple example.

Now let us see the resultset. 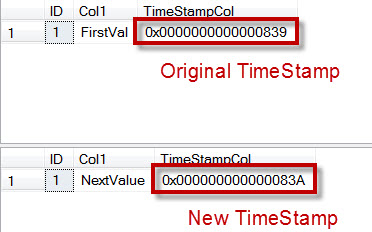 Now let us apply this in an original question’s scenario. In that case multiple users are retrieving the same row. Everybody will have the same now same TimeStamp with them. Before any user update any value they should once again retrieve the timestamp from the table and compare with the timestamp they have with them. If both of the timestamp have the same value – the original row has not been updated and we can safely update the row with the new value. After initial update, now the row will contain a new timestamp. Any subsequent update to the same row should also go to the same process of checking the value of the timestamp they have in their memory. In this case, the timestamp from memory will be different from the timestamp in the row. This indicates that row in the table has changed and new updates should not be allowed.

I believe timestamp can be very very useful in this kind of scenario. Is there any better alternative? Please leave a comment with the suggestion and I will post on the blog with due credit.