As a DBA or SQL Developer, the amount of time we work with SQL Server Management can never be measured. As a database person, these hidden gems of SQL Server can never be underestimated. With each release the tool improves to give the next set of features. I have seen in multiple blogs where the Product Managers constantly ask for feedbacks and are looking at making enhancements to the tool. If you goto the connect site, the votes for a feature requests decides if they will ever make it into the next release of SSMS. If you get the drift, knowing the statistics on a given request decides how the feature will get added. These statistics and questions gives product team the confidence to people’s request. Similarly when working with SQL Server objects, it will be useful if we can know how many times a procedure were called and how many CPU, IO cycles were spent. Let’s see Resource Locking and Object Execution Statistics Report.

In this part of blog we would talk about two reports from the Database level standard reports as shown in the diagram. 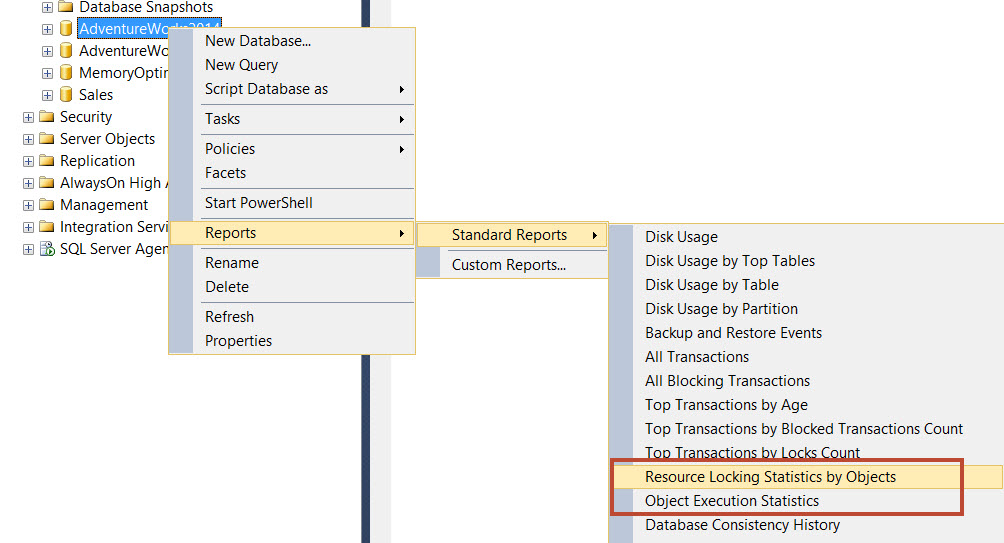 “Currently, this graph does not have any data to show”. This is shown in the diagram below. 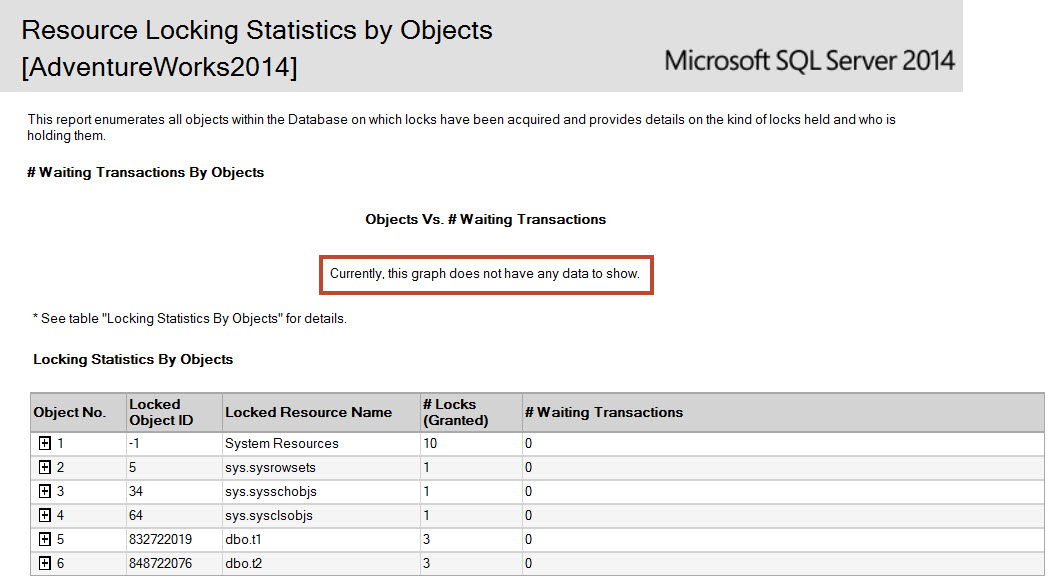 For demonstrate purpose I have created two blocking chains, one for table t1 and another for table t2. And have launched the repot again. If we compare this with earlier report, it’s clearly visible that the warning is not available and as highlighted in the image, we can see non-zero value under “# Waiting Transactions”. Without clicking on (+) it would not be possible to see who is blocked.

Once we expand Object No. 1, below is what we get. We can clearly see that there are 5 locks which are granted and 1 lock on RID is in WAIT status. The SPID is shown at the same level.

The majority of blocking information in this report is picked from DMV sys.dm_tran_locks and sys.dm_exec_sessions. Other information about object metadata is from catalog views – sys.partitions, sys.objects, sys.schemas

This is one of the interesting report which shows information about the execution of objects in the database. If we launch this report for a database which is not used and plans for any object, stored procedure, function etc. is not available in plan cache then we would see “empty” report like below. 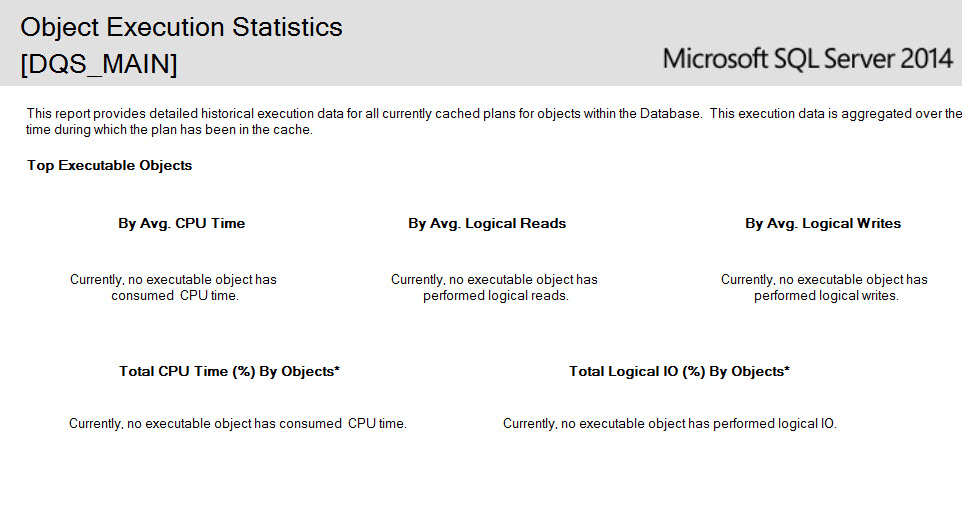 There are five graphs available in the report. All of them are taken from the information available in DMV sys.dm_exec_query_stats which contains historical information about query executions since it was started. If plan is evicted from the cache then the report would not show the query which might be a problem.

To show some data in report, I have executed some stored procedures and functions in AdventureWorks2014 sample database. Here is the report when we have plans available in cache. This is what you would see on production server. 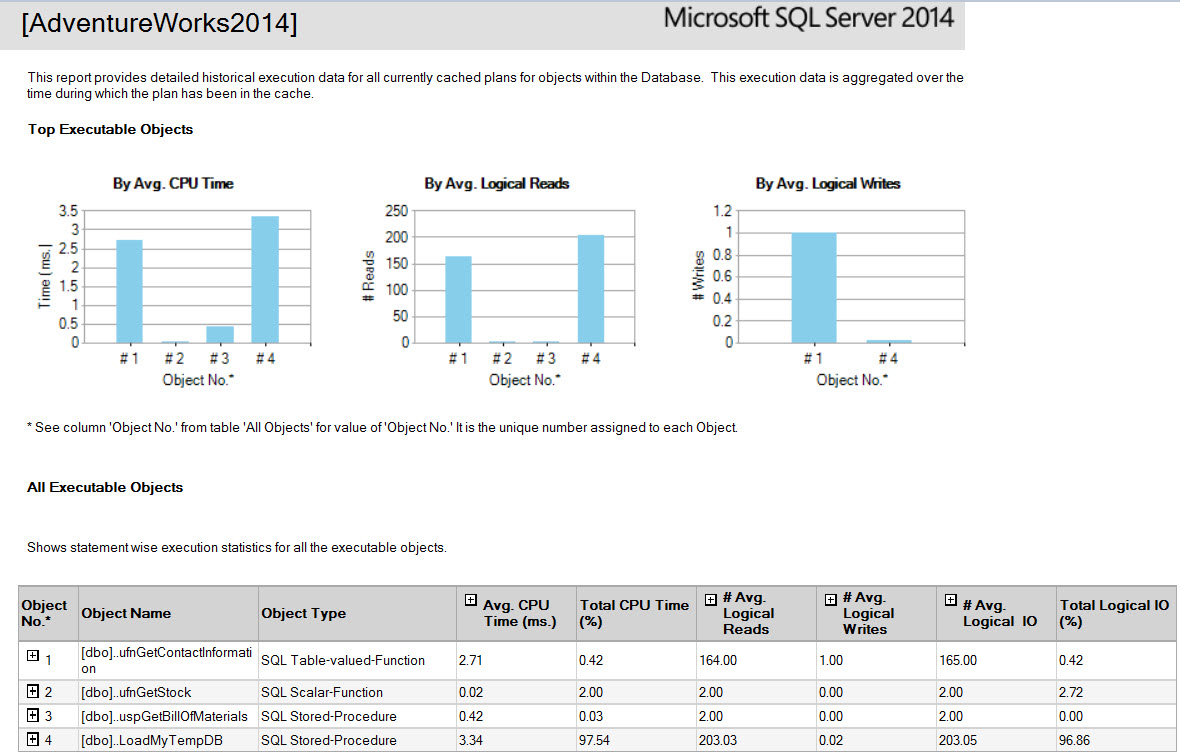 You would notice that out of 5 graphs only 3 are shown. That’s due to the fact that they are not significant higher and would be shown as zero.

Under the cover, it runs below query. I have modified query a little bit to show meaningful column name.

This query would give the results for the database in which it would execute. Notice that there is a filter for db_id() in where clause. In the graph, we can observed object # assigned which is detailed in the table shown below the graph under heading “All Executable Objects”

If we click on (+) sign near Object No column, we can see more details about individual statement in the object. In below image, I have clicked on the (+) symbols near 2 and we can see statement within the function. You would see more rows if there are more statements in the procedure. 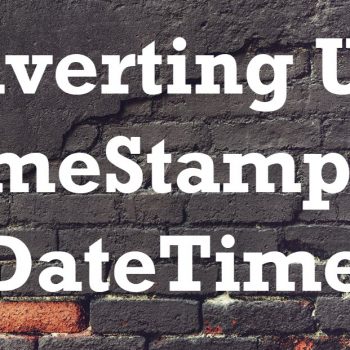 SQL SERVER – How to Kill All the Processes for Any Database?