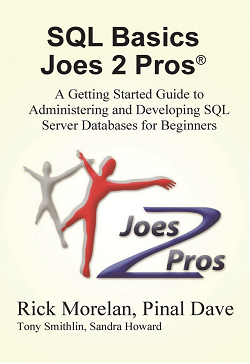 Here is the list of all the 10 videos which we have posted earlier which are very well received in the community. Now to take this entire thing to the next level – here is a quick contest. Please tell us which is your favorite video out of the 10 videos and why? If your choice matches the choice of Rick and Myself (Pinal) – we will give you a free copy of our latest book SQL Basics. You can get that in Paperback (USA) and Kindle (Worldwide). Additionally, not only 1 copy but we will have 10 winners for the contest. In case of a tie we will select the winner based on the WHY?

SQL Basics Video: What Are Filegroups – SQL in Sixty Seconds #064