Jonathan Kehayias (Blog | Twitter) is a MCITP Database Administrator and Developer, who got started in SQL Server in 2004 as a database developer and report writer in the natural gas industry. After spending two and a half years working in TSQL, in late 2006, he transitioned to the role of SQL Database Administrator. His primary passion is performance tuning, where he frequently rewrites queries for better performance and performs in depth analysis of index implementation and usage. Jonathan blogs regularly on SQLBlog, and was a coauthor of Professional SQL Server 2008 Internals and Troubleshooting.

On a personal note, I think Jonathan is extremely positive person. In every conversation with him I have found that he is always eager to help and encourage. Every time he finds something needs to be approved, he has contacted me without hesitation and guided me to improve, change and learn. During all the time, he has not lost his focus to help larger community. I am honored that he has accepted to provide his views on complex subject of Wait Types and Queues. Currently I am reading his series on Extended Events.

SQL Server troubleshooting is all about correlating related pieces of information together to indentify where exactly the root cause of a problem lies. In my daily work as a DBA, I generally get phone calls like, “So and so application is slow, what’s wrong with the SQL Server.” One of the funny things about the letters DBA is that they go so well with Default Blame Acceptor, and I really wish that I knew exactly who the first person was that pointed that out to me, because it really fits at times. A lot of times when I get this call, the problem isn’t related to SQL Server at all, but every now and then in my initial quick checks, something pops up that makes me start looking at things further.

The SQL Server is slow, we see a number of tasks waiting on ASYNC_IO_COMPLETION, IO_COMPLETION, or PAGEIOLATCH_* waits in sys.dm_exec_requests and sys.dm_exec_waiting_tasks. These are also some of the highest wait types in sys.dm_os_wait_stats for the server, so it would appear that we have a disk I/O bottleneck on the machine. A quick check of sys.dm_io_virtual_file_stats() and tempdb shows a high write stall rate, while our user databases show high read stall rates on the data files. A quick check of some performance counters and Page Life Expectancy on the server is bouncing up and down in the 50-150 range, the Free Page counter consistently hits zero, and the Free List Stalls/sec counter keeps jumping over 10, but Buffer Cache Hit Ratio is 98-99%. Where exactly is the problem?

In this case, which happens to be based on a real scenario I faced a few years back, the problem may not be a disk bottleneck at all; it may very well be a memory pressure issue on the server. A quick check of the system spec’s and it is a dual duo core server with 8GB RAM running SQL Server 2005 SP1 x64 on Windows Server 2003 R2 x64. Max Server memory is configured at 6GB and we think that this should be enough to handle the workload; or is it? This is a unique scenario because there are a couple of things happening inside of this system, and they all relate to what the root cause of the performance problem is on the system.

If we were to query sys.dm_exec_query_stats for the TOP 10 queries, by max_physical_reads, max_logical_reads, and max_worker_time, we may be able to find some queries that were using excessive I/O and possibly CPU against the system in their worst single execution. We can also CROSS APPLY to sys.dm_exec_sql_text() and see the statement text, and also CROSS APPLY sys.dm_exec_query_plan() to get the execution plan stored in cache. Ok, quick check, the plans are pretty big, I see some large index seeks, that estimate 2.8GB of data movement between operators, but everything looks like it is optimized the best it can be. Nothing really stands out in the code, and the indexing looks correct, and I should have enough memory to handle this in cache, so it must be a disk I/O problem right?

If we were to look at how much memory the plan cache is taking by querying sys.dm_os_memory_clerks for the CACHESTORE_SQLCP and CACHESTORE_OBJCP clerks we might be surprised at what we find. In SQL Server 2005 RTM and SP1, the plan cache was allowed to take up to 75% of the memory under 8GB. I’ll give you a second to go back and read that again. Yes, you read it correctly, it says 75% of the memory under 8GB, but you don’t have to take my word for it, you can validate this by reading Changes in Caching Behavior between SQL Server 2000, SQL Server 2005 RTM and SQL Server 2005 SP2. In this scenario the application uses an entirely adhoc workload against SQL Server and this leads to plan cache bloat, and up to 4.5GB of our 6GB of memory for SQL can be consumed by the plan cache in SQL Server 2005 SP1. This in turn reduces the size of the buffer cache to just 1.5GB, causing our 2.8GB of data movement in this expensive plan to cause complete flushing of the buffer cache, not just once initially, but then another time during the queries execution, resulting in excessive physical I/O from disk. Keep in mind that this is not the only query executing at the time this occurs. Remember the output of sys.dm_io_virtual_file_stats() showed high read stalls on the data files for our user databases versus higher write stalls for tempdb? The memory pressure is also forcing heavier use of tempdb to handle sorting and hashing in the environment as well.

Side Note: The Page Life Expectancy counter dropping briefly and then returning to normal operating values intermittently is not necessarily a sign that the server is under memory pressure. The Books Online and a number of other references will tell you that this counter should remain on average above 300 which is the time in seconds a page will remain in cache before being flushed or aged out. This number, which equates to just five minutes, is incredibly low for modern systems and most published documents pre-date the predominance of 64 bit computing and easy availability to larger amounts of memory in SQL Servers. As food for thought, consider that my personal laptop has more memory in it than most SQL Servers did at the time those numbers were posted. I would argue that today, a system churning the buffer cache every five minutes is in need of some serious tuning or a hardware upgrade.

Back to our problem and its investigation:

There are two things really wrong with this server; first the plan cache is excessively consuming memory and bloated in size and we need to look at that and second we need to evaluate upgrading the memory to accommodate the workload being performed. In the case of the server I was working on there were a lot of single use plans found in sys.dm_exec_cached_plans (where usecounts=1). Single use plans waste space in the plan cache, especially when they are adhoc plans for statements that had concatenated filter criteria that is not likely to reoccur with any frequency.  SQL Server 2005 doesn’t natively have a way to evict a single plan from cache like SQL Server 2008 does, but MVP Kalen Delaney, showed a hack to evict a single plan by creating a plan guide for the statement and then dropping that plan guide in her blog post Geek City: Clearing a Single Plan from Cache. We could put that hack in place in a job to automate cleaning out all the single use plans periodically, minimizing the size of the plan cache, but a better solution would be to fix the application so that it uses proper parameterized calls to the database. You didn’t write the app, and you can’t change its design? Ok, well you could try to force parameterization to occur by creating and keeping plan guides in place, or we can try forcing parameterization at the database level by using ALTER DATABASE <dbname> SET PARAMETERIZATION FORCED and that might help. If neither of these help, we could periodically dump the plan cache for that database, as discussed as being a problem in Kalen’s blog post referenced above; not an ideal scenario.

SQL Server is constantly telling a story to anyone that will listen. As the DBA, you have to sit back and listen to all that it’s telling you and then evaluate the big picture and how all the data you can gather from SQL about performance relate to each other. One of the greatest tools out there is actually a free in the form of Diagnostic Scripts for SQL Server 2005 and 2008, created by MVP Glenn Alan Berry. Glenn’s scripts collect a majority of the information that SQL has to offer for rapid troubleshooting of problems, and he includes a lot of notes about what the outputs of each individual query might be telling you.

When I read Pinal’s blog post SQL SERVER – ASYNC_IO_COMPLETION – Wait Type – Day 11 of 28, I noticed that he referenced Checking Memory Related Performance Counters in his post, but there was no real explanation about why checking memory counters is so important when looking at an I/O related wait type. I thought I’d chat with him briefly on Google Talk/Twitter DM and point this out, and offer a couple of other points I noted, so that he could add the information to his blog post if he found it useful.  Instead he asked that I write a guest blog for this. I am honored to be a guest blogger, and to be able to share this kind of information with the community. The information contained in this blog post is a glimpse at how I do troubleshooting almost every day of the week in my own environment. SQL Server provides us with a lot of information about how it is running, and where it may be having problems, it is up to us to play detective and find out how all that information comes together to tell us what’s really the problem. 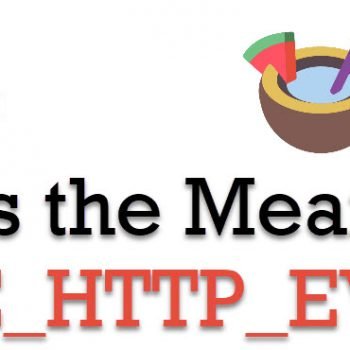 SQL SERVER – What is the Meaning of PREEMPTIVE_HTTP_EVENT_WAIT? How to Fix it?