Community TechDays at Ahmedabad was a great successful event. In fact, this can be considered the biggest event held in Ahmedabad thus far along with the community. This event was held by Microsoft and PASS (Professional Association of SQL Server). The goal of this event was to dive deep into the world of Microsoft technologies and get trained on the latest from Microsoft. Well, we could successfully achieve the same and build real connections with Microsoft experts and community members. I suggest you all to register at or for future notification of similar events.

This event was attended by more than 250+ attendees at any moment, and a total of 300+ attendees for the entire day. We were very fortunate to have such a large technical attendance during the long weekend. Another reason for the success of this event was the impressive line-up of prominent speakers. Ahmedabad, a “small” city in terms of technology, has proved two times in a row that we have much larger technology community than many other prominent cities in India, or in fact the world. 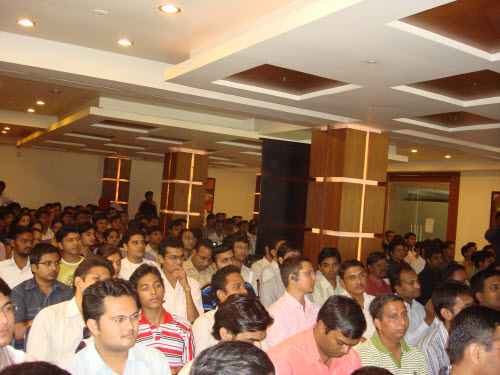 During the session, the hall was jam-packed and with no vacant seats. We are thankful to all those volunteers who offered their seats to the attendees. I am also proud of my UG members who have worked day and night to ensure that this event is a successful one. If you want to be part of UG, please leave a comment here or mail me.

The major attraction of this event was the sessions from Vinod Kumar – Microsoft Evangelist, who is known for his famous SQL site http://extremeexperts.com. UG members of Ahmedabad were looking forward for this session from a long time. The entire SQL Community knows Vinod for his top-notch SQL Sessions. However, while we were deciding the agenda, he suggested that as Jacob Sebastian and myself are local SQL Experts, we should conduct the SQL Session in Ahmedabad. Instead of conducting an SQL Session, he decided to conduct a session on Windows 7 and Office 2010.

Well, I must say that it was a great session! Vinod’s session, which was initially planned for 2 hours, had to be continued after the stipulated time because the attendees would not let him go. This excellent session, which went on for 3 hours, was very well received and none of the attendees moved from their seats. In fact, to end the session, Vinod had to promise everyone that he will be visiting Ahmedabad again. 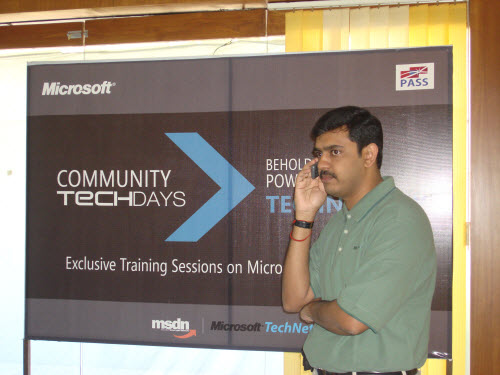 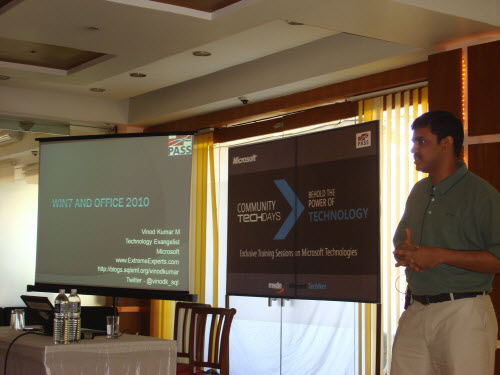 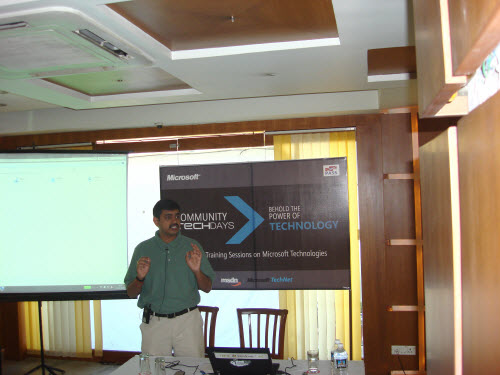 The excellent morning session by Vinod was followed up by two back-to-back SQL sessions. The first Session was conducted by Pinal Dave (myself), and the subject was very well received. I had presented on the subject – ‘SQL Server – The Other Side of Index’; it was really interesting to explain this subject. Professionally, I have been working for SQL Server optimization and query tuning for a long time, and I have created this session from my real world experience. Quite often, I have seen developers with a wrong understanding of an Index and its utilization. I explained four major concepts of the Index in my session. 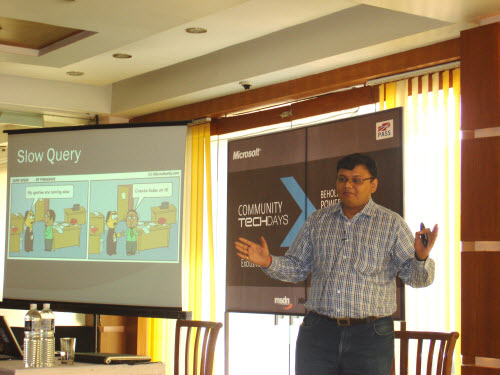 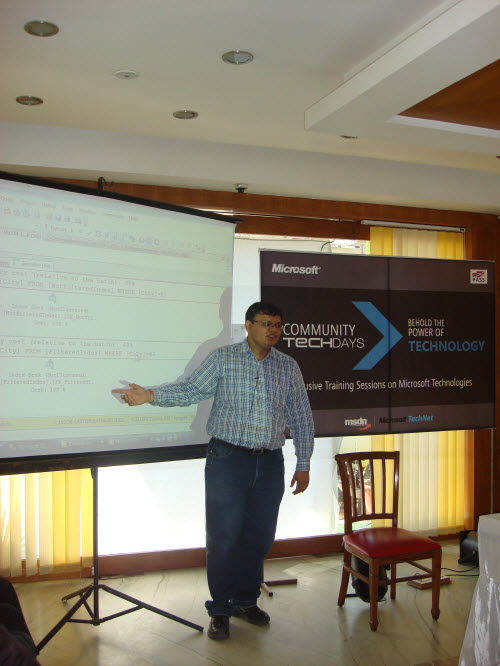 My session was followed by another most awaited session of the day, which was conducted by Jacob Sebastian, who is an SQL Server MVP and also my friend. He presented the session on a very unique subject. Jacob talked about ‘The Best Practices for Exception Handling and Defensive Programming in Microsoft SQL Server’. This session was the most interactive session of the day. If you have missed this session, then you have surely missed the most interesting session. Jacob talked about so many different myths of proper coding and transaction error handling. He also talked about different techniques that can defend the developer for future errors or improper coding. 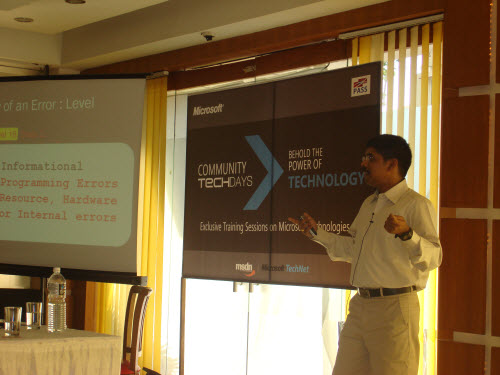 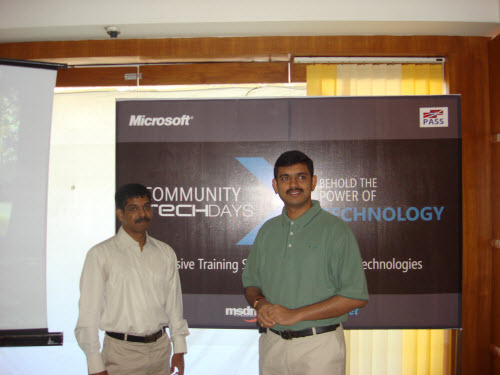 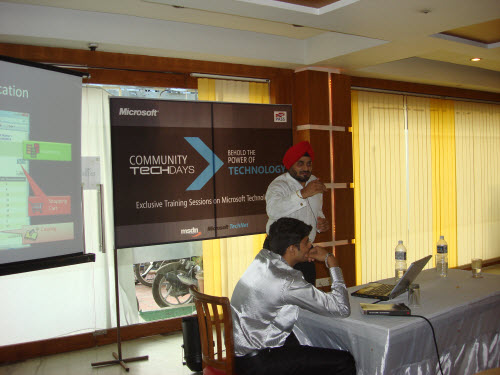 Usually, for such events, the post-lunch sessions will have fewer crowds than those in morning sessions. Surprisingly, here we had a large number of SQL enthusiasts attending this event throughout the day. At the end of the session, we had more than 300+ attendees. There were many attendees who waited outside the hall in order to converse with the speakers. I am very much thankful to all the attendees who made this event a great success. 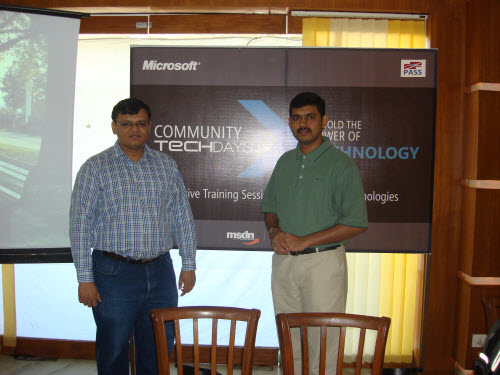 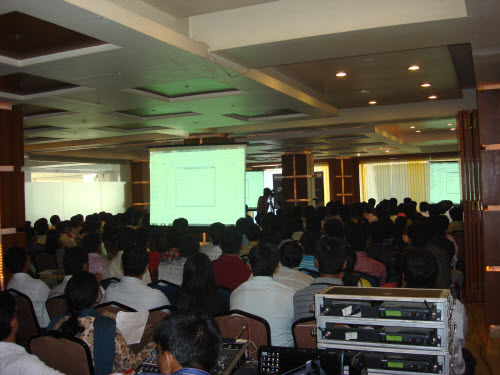 I also would like to thank two more people who were not present at the session, but without their continuous support and help, this event would not have materialized: Pradipta Sharma of Microsoft, who was in charge of this event, and Ashwin Kini, who coordinated this event with utmost dedication. Ashwin and Pradipta, thanks a lot for your support!

Overall, this was the biggest and brightest community event in the history of Ahmedabad.

SQLAuthority News – PASS Sessions – I will be there! 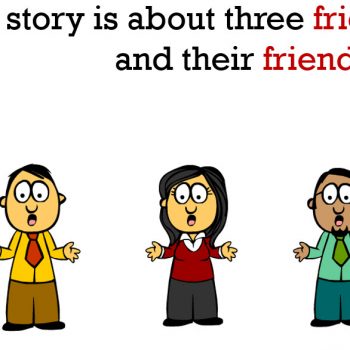