Note: Before running all the examples, make sure that you have the required folders created on your drive. It is mandatory to create Backup folders prior to creating backup files using SQL Server.

In our example, we will require the following folders:

Just a day before working on one of the projects, I had to take a backup of one database of 14 GB. My hard drive lacked sufficient space at that moment. Fortunately, I had two 8 GB USB Drives with me. Now, the question was how to take a backup in two equal sizes, each of 7 GB, so I can fit them on each USB drive. Well, conventional backup takes one large backup in one file. However, SQL Server backup command can take backups in two or more split parts.

Let us see an example of a conventional one-file backup using the AdventureWorks database.

The result is displayed below. Here, the backup is taken in a single file. 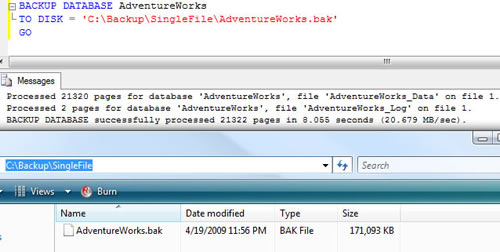 Now, let us see how we can split one database into two different database files. This method is very similar to taking a single-file backup. By simply adding an additional DISK option we can split the files backup files.

In the previous example, we can clearly see that backup is split into three equal parts of the original backup file size. 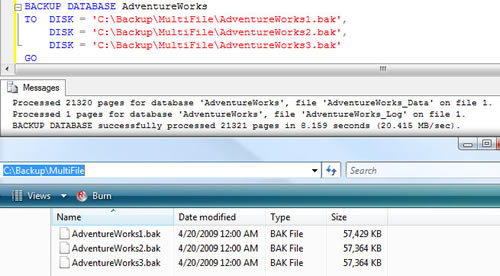 Restoring a backup from a single-file backup is quite easy. Let us go over an example where we restore the AdventureWorks database from a single backup file.

Running the above script will give a successful message.

Running the above script will give a successful message as shown in the image below.

Make sure that while restoring database, the database is not in use, otherwise it will give an error of database in use. In the event of an error taking place, close all the connections and re-attempt to restore the database.

Mirror Backup of the file

It is quite a common practice to create an exact copy of the backup and store it to several places to deal with any catastrophes which might affect the place where the database is stored. Once a full backup is accomplished DBAs generally copy the database to another location in their network using a third party tools like robocopy or native DOS commands like xcopy.

In SQL Server 2005 and later versions, there is a Mirror command that makes a copy of the database backup to different locations while taking the original backup. The maximum limit of additional locations that can be specified with MIRROR clause is 3.

Mirrored backup can be taken in the local computer system as well as in a local network. Let us now see two examples of mirror backup.

If this command is being run for the first time, it is mandatory to use the WITH FORMAT clause; but for sub sequential runs it is not required. WITH FORMAT reinitializes the backup.

When checked in both the folders ‘SingleFile’ and ‘MirrorFile’, backup files are exactly the same files. As mentioned earlier, four mirror backup can be specified in total.

We have earlier seen an example where we can have multiple split files of large database backup files. SQL Server Mirror functionality also supports backup of the split files.

All the mirror sets will need the same number of DISK clauses as the original backup media.

The FORMAT clause is used to reinitiate a backup media. Although it is a very useful clause it should be used with caution. When the clause is used it erases everything present in backup media. I have noticed that some DBAs are confused while taking a backup on a local disk where they have SQL Server installed. They have a misconception that if the format command is used, it will erase the complete disk including the SQL Server installation. However, the fact is that SQL Server format clause is quite different from OS format. The effect of SQL Server format clause is limited to a folder or path specified in the DISK clause.

In our example, when the FORMAT clause is specified, it will format only folders like C:\Backup\MultiFile\ or C:\Backup\SingleFile.

Error 3010
Invalid backup mirror specification. All mirrors must have the same number of members.

This error can show up while taking a mirrored database backup along with a regular backup; and DISK and MIRROR TO DISK do not match accurately.

The following image demonstrates how the error takes place.

To fix the error, match the members of DISK and MIRROR TO DISK to each other.

This error can spring up when a new backup is initiated and an existing media header needs to be reset for all headers on the backup media. If there is already a backup on the media, it will display this error and prevent backup from being overwritten. To fix this error, use WITH FORMAT as shown in an earlier example.

Miscellaneous details about Backup and Restore

When no options are specified, BACKUP DATABASE takes only full backups. Before taking the first log backup, full database backup is necessary to take one full backup. Backups created on later versions of SQL Server cannot be restored to earlier versions of SQL Server. The user needs permissions of sysadmin or db_owner or db_backupoperator roles to perform backup operation.

Watch a 60 second video on this subject 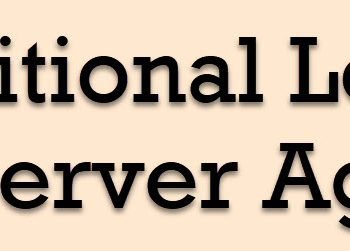 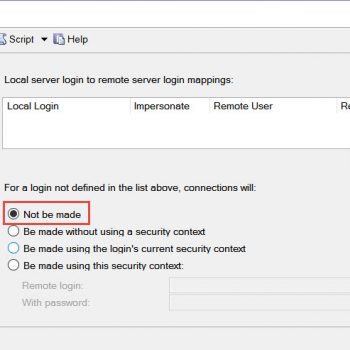 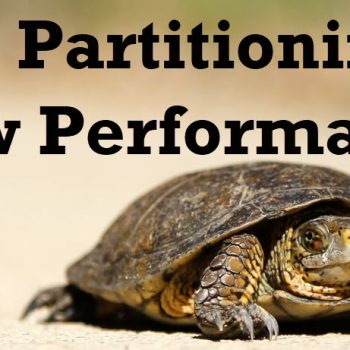