SQL Server Profiler is a powerful tool that is available with SQL Server since a long time; however, it has mostly been underutilized by DBAs. SQL Server Profiler can perform various significant functions such as tracing what is running under the SQL Server Engine’s hood, and finding out how queries are resolved internally and what scripts are running to accomplish any T-SQL command. The major functions this tool can perform have been listed below:

Dilemma to use on Production Server

SQL Server Profiler has a lot of potential as a tool and offers several advantages. Unfortunately, developers have been keeping their hands off from this tool and usually give two major excuses.

It cannot be denied that both the above excuses are valid reasons and play a significant role in discouraging developers from using the profiler. When a profiler is run over a production server it adds additional load on the CPU. However, the real question is – How much load does the profiler add to CPU? It may be possible that the production server’s CPU is not used more than 50% at all, and running the profiler over that database will not degrade the performance.

If the profiler is configured appropriately to trace only relevant data for analysis, it will diminish the additional load that is introduced while it is running. If the profiler is run for a longer duration, then to capture the event of longer duration it is very important to collect selective data, otherwise the collected data can outgrow the space on the server.

It is important to understand profiler terminology before digging into its details and finding how it works.

Event – An event is an action within an instance of SQL Server Database Engine. Some good examples of event are running any T-SQL or performing any operation in the SSMS that is related to database; running stored procedures, and creating jobs.

Event Class – An event class can be defined as a type of event that can be traced. Examples of event classes are SP:Starting and RPC:Completed.

Event Category – Group of events are called an event category. Examples of event category are Stored Procedure and Locks. In fact, there can be multiple event categories that can be selected for single trace.

Filter –Filters are used to create selectiveness in data that are collected in trace.

Trace – A trace captures data based on the selected event classes, data columns, and filters. A trace devoid of filter can be very hefty. Columns that are indispensable for the analysis should be selected only in trace. Trace can be saved in the database as well as in trace files.

Some very basic examples are presented below where data has been captured.

SQL Server profiler is a component of client tools and can be installed independently from SQL Server Database Engine. It is mandatory for the user to have “system admin” rights to start the profiler. It can be started using the following methods.

3. For SQL Server 2008, type profiler in the command prompt.

Once the profiler is started click on Menu >> File >> New Trace.

This will display a login prompt very similar to SQL Server Database Engine. Connect with the appropriate username and password.

It will display the ‘Trace Properties’ screen. On this screen you can enter the trace name. You will notice that trace provider name, type and versions are pre-populated and cannot be altered. These are set based on which SQL Server instance you are connected with.

The ‘Trace Properties’ screen contains a drop-down for template selection, which is labeled with ‘Use the template’. As mentioned earlier, the default template selected is standard. We can see what events are included in the Standard template in the next tab, ‘Events Selection’.

There is another button named ‘Organize Columns’ on the same screen. This screen can be used to organize and group columns. Please note that columns cannot be grouped or ordered once the process of trace collection has begun.

The ‘Trace Properties’ screen contains a ‘Run’ button. When you click on this button, it runs the trace. The trace can be paused or stopped as required using the play menu on top.

This article is a prologue to SQL Server Profiler. In the next article, I will talk about filtering and organizing columns. In addition, I will include storing trace file in the database table and querying table.

Please write to me at pinal@sqlauthority.com or contact me using form on my blog https://blog.sqlauthority.com/ if you have any doubt, big or small, regarding this article. 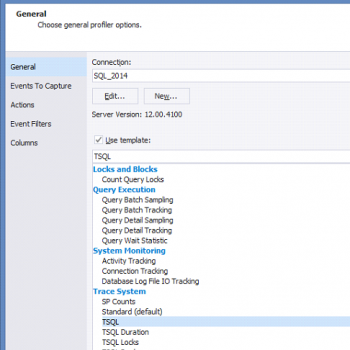