It is second to human nature to utilize every bit of juice for what we pay. You buy something and you would like to get the best out of it right? If you start thinking from an organizations point of view, they think they should buy something which satisfies their needs. That is the only reason why organizations do capacity planning for their applications. Hardware resources are not cheap and it is difficult to over budget on them. Below is a real world query that had come to me.

One of my friend contacted me and told that he is using task manager and seeing that out of 64 processor only 20 processors are shown as utilized for a SQL Server machine. Whenever someone contacts me for any issue, I always want to know their environments details and ERRORLOG gives me a fair idea about it. If you don’t know where ERRORLOG is then you may want to read my earlier blog.

SQL SERVER – Where is ERRORLOG? Various Ways to Find its Location

So, he sent me an ERRORLOG and I found below message over there.

This explains the behavior which he is seeing but he also wanted to fix it. I went ahead and looked in the ERRORLOG’a again and found below on the top.

This is an enterprise edition of SQL so I was expecting it to use all processors and full power of the machine. I searched licensing guide and found that from SQL Server 2012 onwards, there are two enterprise licenses – Core Based and SERVER/CAL Based. As per my research, CAL based license limits SQL Enterprise to use only 20 physical processors. If hyper-threading is enabled then it would be 40 logical processors.

Once complete, the Errorlog showed below.

If you are using SQL 2012 onwards and having big machine, I would like you to check the ERROLROG and check if you are running into same issue. Else you can also run

This is mostly observed when there is an upgrade from earlier version of SQL Server because you might not be aware of that. Check and comment if this blog has helped you. 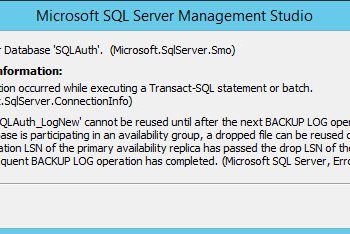 SQL SERVER – Error: 17142 – SQL Server Service has Been Paused. No New Connections Will be Allowed