SQL SERVER – What are T-SQL Window Functions? – Notes from the Field #082

[Note from Pinal]: In this episode of the Notes from the Field series database expert Kathi Kellenberger explains about easy and amazing functions of SQL Server. Kathi is an amazing instructor, she was the SQL author I have read in my early career. The reason, I love SQL Server because her writing has instigated love for this technology in me. Today she brings a relatively interesting topic for database experts. Read the experience of  Kathi in her own words.

The first set of T-SQL window functions have been available for 10 years, but many SQL Server professionals are not quite sure what window functions are. I am frequently asked by people I meet at conferences and customer sites “What are window functions?” I always answer with another question, “Do you use ROW_NUMBER?” Almost every time, the answer is “Yes. I didn’t know that was a window function.”

T-SQL window functions are different than other T-SQL functions because they operate over a set, or window, of rows. Notice that I am not capitalizing “window.” They have nothing to do with the Windows operating system. They are part of the ANSI SQL 2003 standard.

T-SQL window functions give you the ability to perform a calculation over the rows that are the result of the FROM, WHERE, GROUP BY and HAVING clauses. You can do things like include a column from a different row, calculate running totals, and perform summary calculations without losing details or grouping.

My favorite T-SQL window function is called LAG. LAG, introduced with SQL Server 2012, lets you bring in a column from a previous row. This is useful for calculating year over year performance, for example.

Here is the syntax of the LAG function:

You must provide the column name that you wish to bring forward, and you must provide an ORDER BY expression. The ORDER BY is used to determine just which row is the previous row. By default, the value returned is from the previous row. By specifying an offset, you can go back any number of rows. You can also specify a default value to replace any NULLs that are returned.

Run the following script to create and populate a table for testing LAG.

The following query uses the LAG function with an offset value of four to return the sales from the same quarter of the previous year. 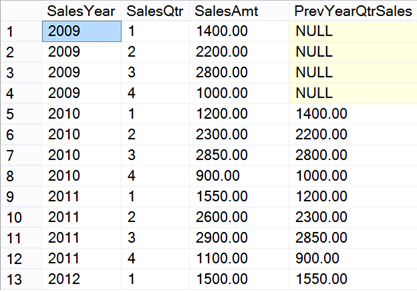 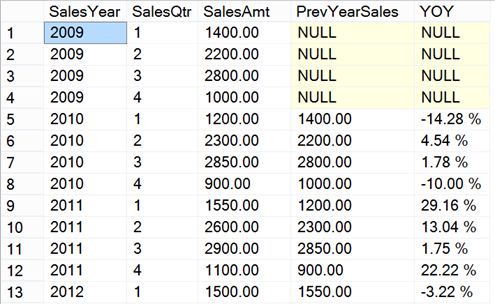 The LAG function is really easy to use, and it performs great. If you would like to learn more about LAG and all of the other T-SQL window functions, be sure to check out my new book: Expert T-SQL Window Functions in SQL Server. 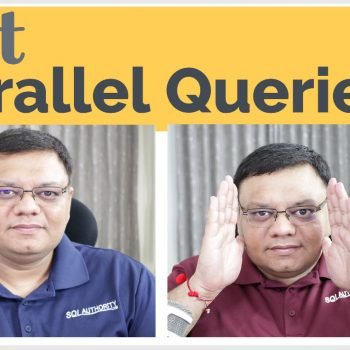