When I used to be in the consulting business, the most request session or topics always revolved around Performance Tuning. And whenever I talk to folks around what they want to get covered, they often get to a point of when and how to create efficient indexes in my database. The concepts of indexes and how they function have been in the industry for more than 2 decades and it still baffles me how they are still a topic of debate and interest. The core fundamentals of Indexes have surely stood the challenges of time and are still a great starting point for building highly performant SQL Server or for that matter data centric applications. I consider creating indexes as science rather than rules of thumb. SQL Server is a cost based optimizer and does a pretty good job in identifying, evaluating and using the right index based on your query needs. Having said that, it is also upto an administrator to monitor how the indexes are being used in a given database. Which are the ones mostly used and which least. It is a fine line to walk to understand and eliminate unwanted and duplicate indexes from time to time created by developers. I do have a starter script for duplicate indexes which is worth a look.

In this blog, we would take a quick look at three reports which are available under Database node.

This report show the information about Index operational statistics and usage statistics. When I say usage I mean, the statistics about scans, seeks, when it was last accessed, how many user scans etc. The queries used in the background is pretty straight forward. Index Operational Statistics section shows data using below DMV sys.dm_db_index_operational_stats(db_id(),null,null,null) long with other catalog views to convert object ids to name. Next section Index Usage Statistics shows the data using DMV sys.dm_db_index_usage_stats which is well documented in book online. 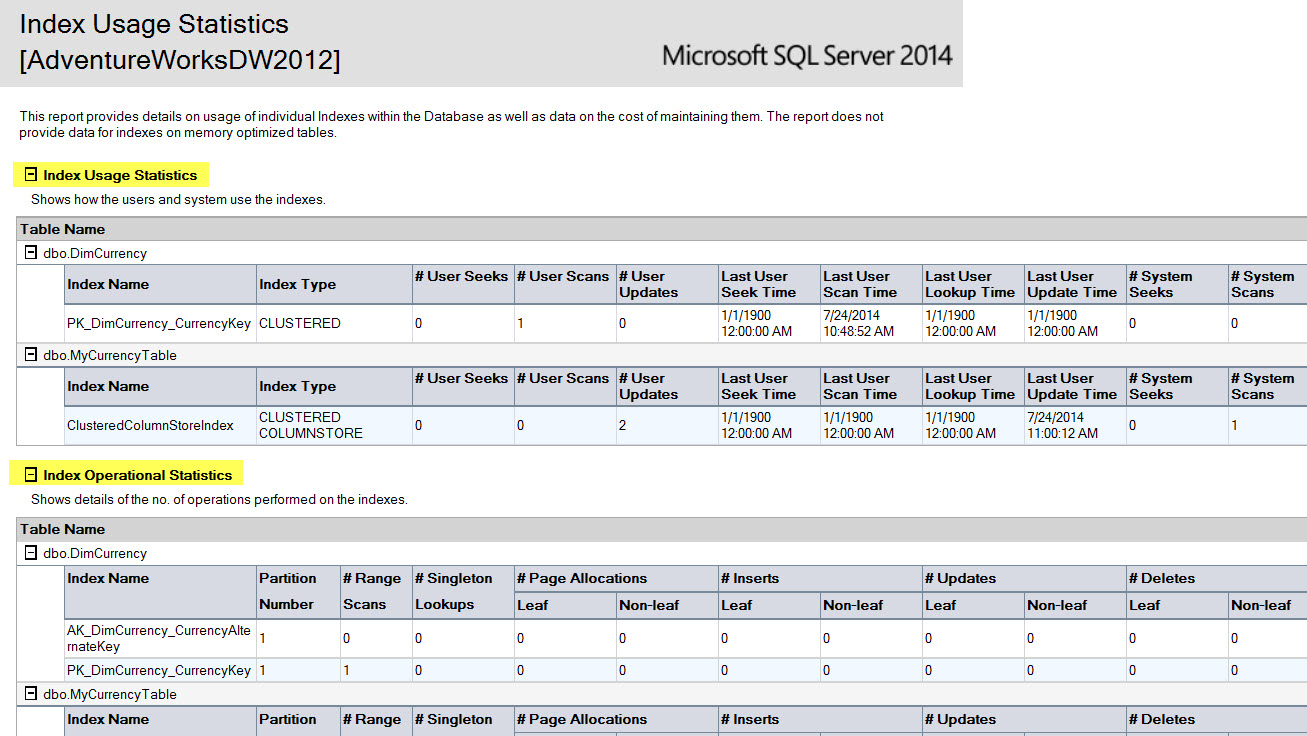 Using above report, we can see which Index is used by various queries and if they are doing seek or scan. If it is a small table then it might be OK to see scan but in general, I don’t get a good feeling when I see scan of an index on huge table. Sometimes I get questions on which indexes are not being used by SQL Server. This report can give us the indexes which are used. If you don’t see index not shown here, it would mean that no query has fired which can utilize that index. So, please don’t drop the indexes which the assumption that they are not getting used. Also if the server was restarted recently, there wouldn’t be statistics for us to play with or show in this report.

As the report name says, it show how the index is physically laid out on data files. Here is how the report looks like: 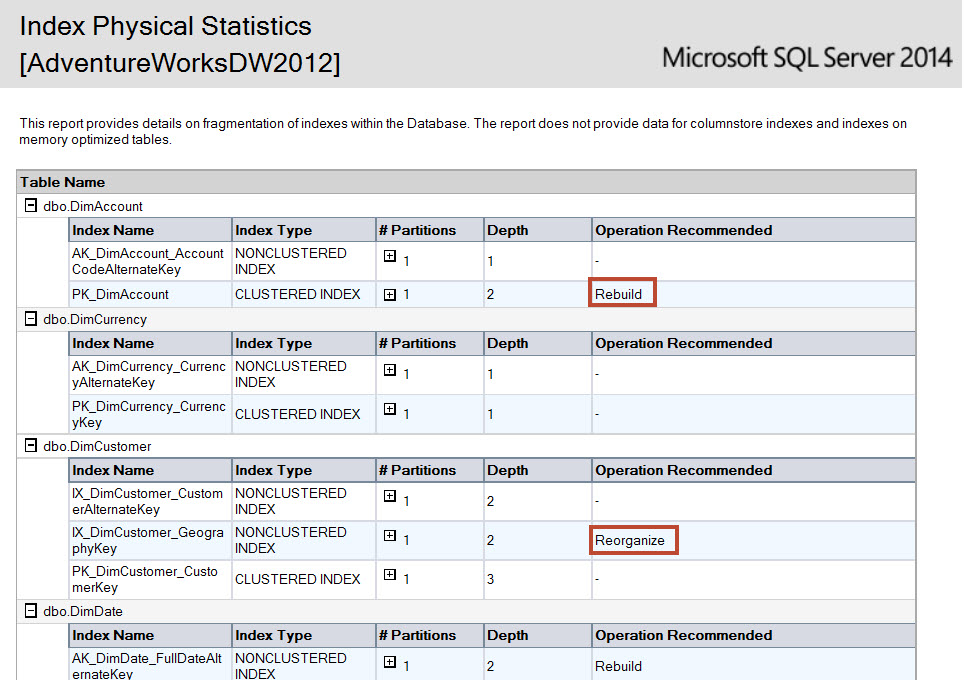 Under the hood, this report uses below objects.


If we look at the report it gives recommendation about “Operation Recommended” – Rebuild or Reorganize. The recommendation is depending up-on the fragmentation in the index. I must point out that the report does NOT consider the size of table. For example, if I have an index which is having only 10 pages, even rebuild or reorganize might not remove the fragmentation. So, you should click on (+) symbol and see how big the table it. To demonstrate this, I have selected first table.

Even if I rebuild the index, it would still recommend Rebuild. Notice that this index has just 2 pages so we don’t have to worry about fragmentation.

This report has no relation with Indexes but since this is a small report, I would club them in this blog. This particular report shows information about the users who are connected to database for which report is launched. This report would be useful in situation multiple applications use different logins to connect SQL Server Instance.

Here is the query used under the hood.


All you need to notice is that information is fetched from sys.dm_exec_sessions, sys.dm_exec_connections and master..sysprocesses. You can also observe that filter has been added for DB_ID() which gives the database id for the connection which is running the query. Here is the report.

In the column “Active Sessions” there is a (+) symbol for each row which can be used to get details about the sessions used by that particular login.

This is a long and exhaustive list of SSMS reports that we covered as part of the series. Let us see how this learning can be put to use in our environments and let me know if you learnt something new in this series till now. 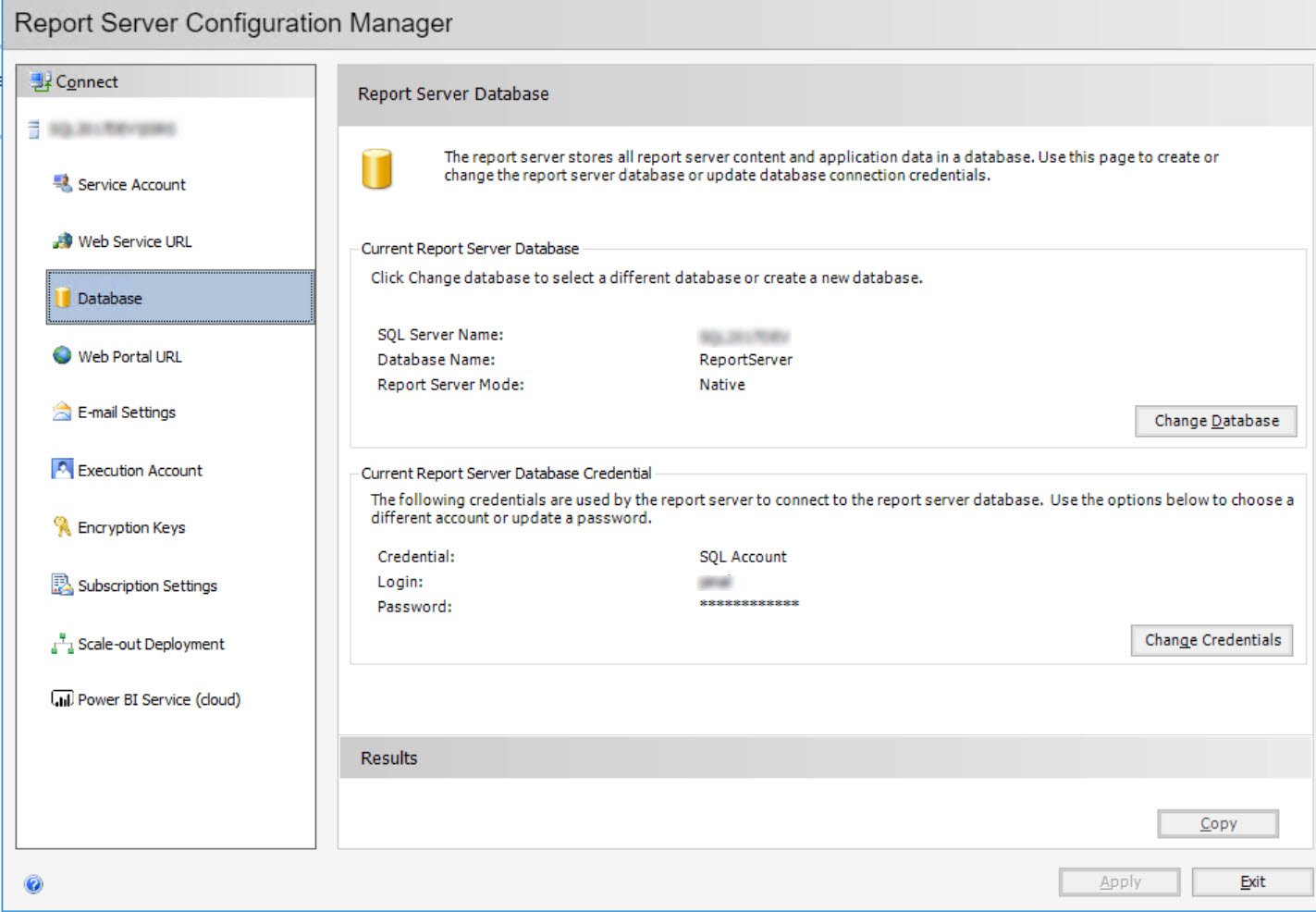