The month of June till mid of July has been the fever of sports. First, it was Wimbledon Tennis and then the Soccer fever was all over. There is a huge number of fan followers and it is great to see the level at which people sometimes worship these sports. Being an Indian, I cannot forget to mention the India tour of England later part of July. Following these sports and as the events unfold to the finals, there are a number of ways the statisticians can slice and dice the numbers. Cue from soccer I can surely say there is a team performance against another team and then there is individual member fairs against a particular opponent. Such statistics give us a fair idea to how a team in the past or in the recent past has fared against each other, head-to-head stats during World cup and during other neutral venue games.

All these statistics are just pointers. In reality, they don’t reflect the calibre of the current team because the individuals who performed in each of these games are totally different (Typical example being the Brazil Vs Germany semi-final match in FIFA 2014). So at times these numbers are misleading. It is worth investigating and get the next level information.

Similar to these statistics, SQL Server Management studio is also equipped with a number of reports like a) Object Execution Statistics report and b) Batch Execution Statistics reports. As discussed in the example, the team scorecard is like the Batch Execution statistics and individual stats is like Object Level statistics. The analogy can be taken only this far, trust me there is no correlation between SQL Server functioning and playing sports – It is like I think about diet all the time except while I am eating.

Let us view the first report which can be invoked from Server Node -> Reports -> Standard Reports -> Performance – Batch Execution Statistics.

Most of the values that are displayed in this report come from the DMVs sys.dm_exec_query_stats and sys.dm_exec_sql_text(sql_handle).

This report contains 3 distinctive sections as outline below. 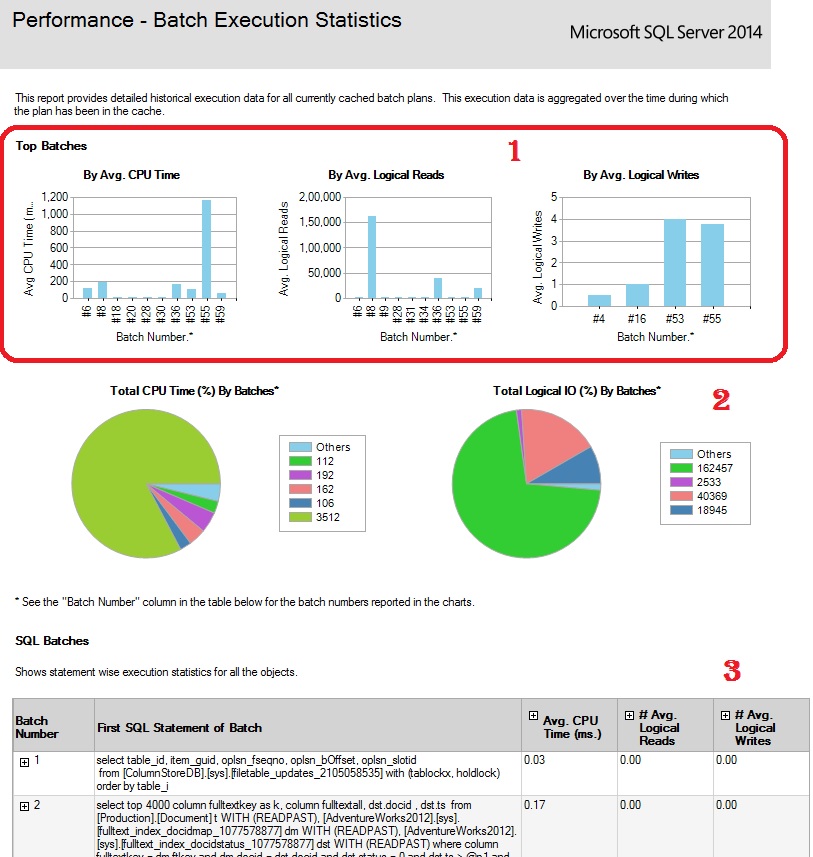 Section 2: This represents a Pie chart of all the batches by Total CPU Time (%) and Total Logical IO (%) by batches. This graphical representation tells us which batch consumed the highest CPU and IO since the server started, provided plan is available in the cache.

Section 3: This is the section where we can find the SQL statements associated with each of the batch Numbers. This also gives us the details of Average CPU / Average Logical Reads and Average Logical Writes in the system for the given batch with object details. Expanding the rows, I will also get the # Executions and # Plans Generated for each of the queries.

The second report worth a look is Object Execution statistics. This is a similar report as the previous but turned on its head by SQL Server Objects.

The report has 3 areas to look as above. Section 1 gives the Average CPU, Average IO bar charts for specific objects. The section 2 is a graphical representation of Total CPU by objects and Total Logical IO by objects. 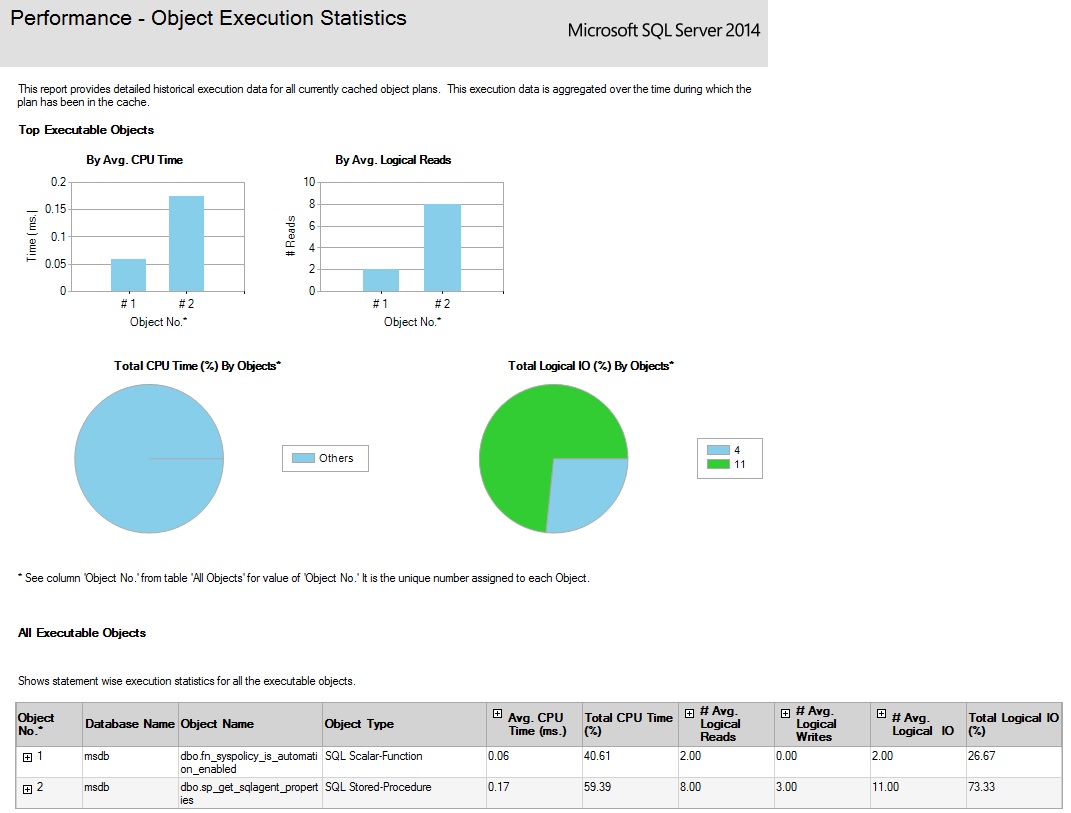 The final section details the various objects in detail with the Avg. CPU, IO and other details which are self-explanatory.

At a high-level both the reports are based on queries on two DMVs (sys.dm_exec_query_stats and sys.dm_exec_sql_text) and it builds values based on calculations using columns in them:

This is one of the simplest form of reports and in future blogs we will look at more complex reports.

I truly hope that these reports can give DBAs and developers a hint about what is the possible performance tuning area. As a closing point I must emphasize that all above reports pick up data from the plan cache. If a particular query has consumed a lot of resources earlier, but plan is not available in the cache, none of the above reports would show that bad query. 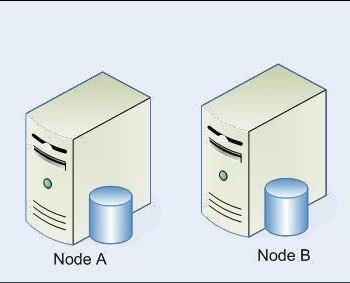 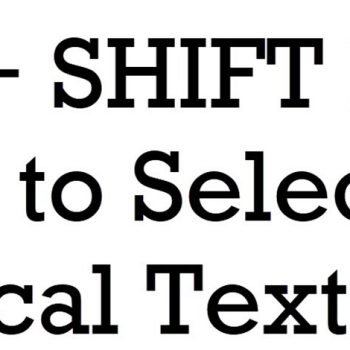