Have you ever been to a music concert? It is the most humbling experience one can get as a music lover. The live music with hundreds of musicians in one stage brings goosebumps with the very thought. I have always been fascinated and wanted to experience this once in a lifetime and am sure that day is not far off. What strikes me big time is the conductor, standing alone with a small stick orchestrates these fabulous musicians to give all of us a delight and experience of a lifetime. This brings me to today’s topic of discussion on the Scheduler Health Report. In a way the conductor inside SQL Server is our scheduler – who makes sure all the activities and all parts get their share of time to execute. Looks like a dream job, but trust me there is lot of effort in understanding how each components works just like how a conductor really knows when to introduce a new instrument as part of the concert. Before I start explaining about this report component, it’s important to go through the basics of SQL Scheduler which would help in understanding this report.

SQL Server has a mini operating system which manages the resource by its own, that’s why you would hear term called SQLOS. By resources we mean CPU, Memory and IO available on the machine.

Whenever any request is received in SQL Server, it would be assigned to a thread and that thread would be scheduled on a scheduler. This might go to multiple scheduler in case of parallelism though. Those threads which are ready to run would be scheduled and sent to the operating system for execution. Imagine a situation of blocking where a blocked thread can’t do anything unless the resource is available. In such situation, does it make sense to send this request out to the operating system for scheduling? Of course not! That’s why this mini operating system does better scheduling and SQL can scale up very well as workload increases. Another advantage of the SQLOS layer is to reduce context switching of threads in operating system because it only sends the threads which can do some meaningful work.

To know more about our Scheduler, here is the place to get this report. Right Click on Server node, choose Reports > Standard Reports > Scheduler Health. 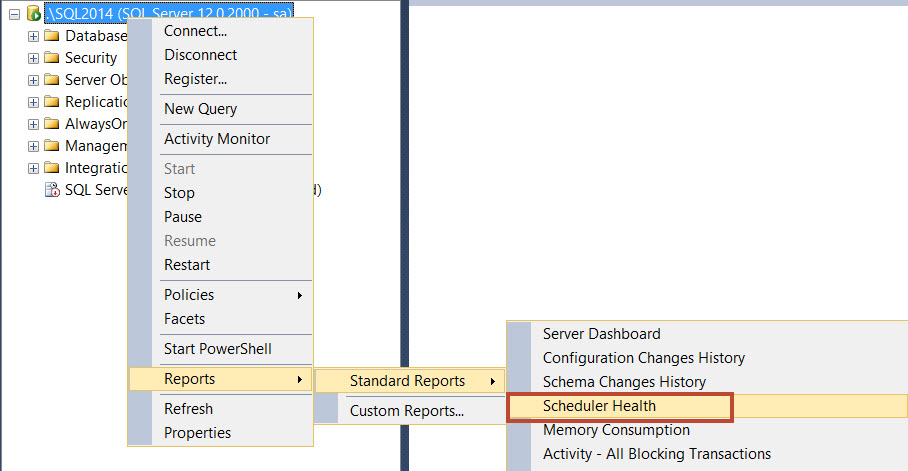 The complete reports revolves around SQLOS. SQLOS has something called non-preemptive scheduling (also known as cooperative scheduling) which is different from the scheduling done by the operating system. Windows operating system does preemptive scheduling where a thread would get a fixed amount of time to run on the CPU. Once the time slice is completed, it would be snatched out of the CPU and put into the queue for the next chance to run. This is a fair game because all threads are getting a chance to run. On the other hand, in SQLOS a thread would do its work and come back to the scheduler by its own; no one is going to take him off the scheduler. This term is called as yielding. If a thread went out from SQLOS layer and didn’t come back – it’s called as non-yielding situation. If all schedulers have the same problem of non-yielding them you can imagine that SQL would go to “hung” state. A scheduler can be in three states – Idle (when work_queue_count <> 0), Hung (when yield_count is not changing) or Active (when it’s not in the other two states). Hence the first part of our report shows which states our Scheduler currently is in. In our case, the scheduler is in the Idle state.

Task – represents the work that needs to be performed. It can also be called as unit of work that is scheduled by SQL Server. An example of task could be pre-login, login, query execution, logout and may more. The task can be in various states (PENDING, RUNNABLE, RUNNING, SUSPENDED, DONE or SPINLOOP). Please refer this for more details.

Worker – are the threads who would do the task given by the scheduler.
Request – is the logical representation of a request made from the client application (or work done by system threads) to SQL Server. This request would be assigned to a task that the scheduler hands off to a worker to process.

Now that our fundamentals have been sorted, let us have a look at the second report section: 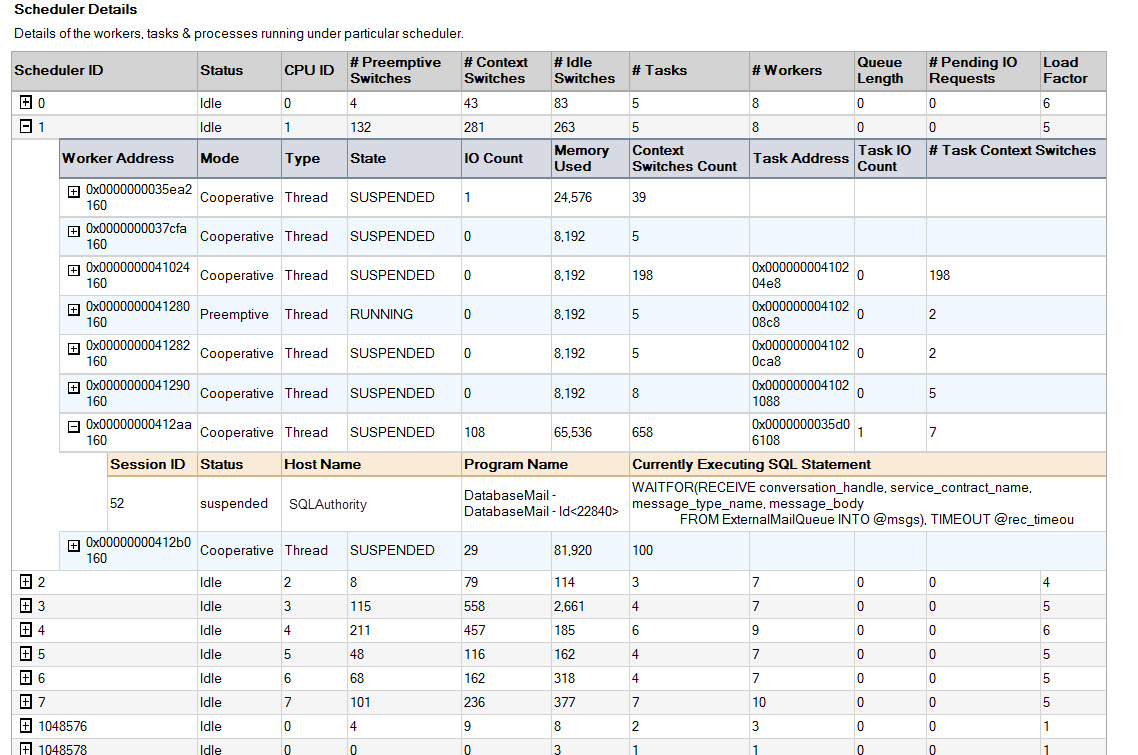 My machine has currently has 8 logical processors and hence we are seeing values of Scheduler ID’s: 0 to 7. Other schedulers are having status as “HIDDEN ONLINE” in sys.dm_os_schedulers. Each scheduler has various workers associated. We can see that in column #Workers for each scheduler rows. Once we click on (+) for the scheduler, we can see details about each worker. Further clicking on (+) for each worker, we can see the work done by that worker.

I hope that this blog has helped you in understanding the basic functionality of SQLOS and how the Scheduler Report drills into the fine prints. 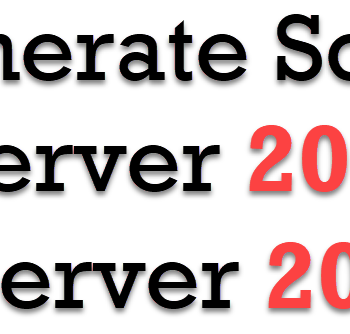 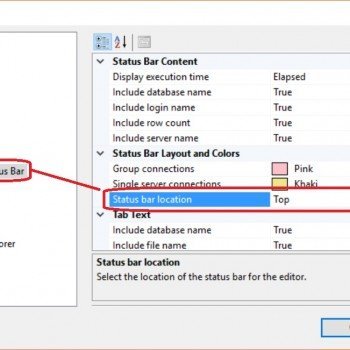 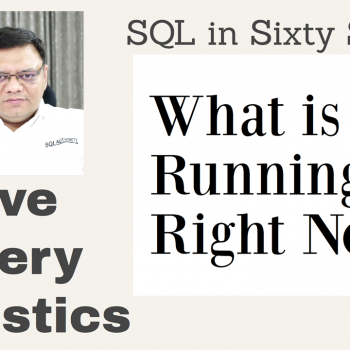