Ahmedabad Community Tech Days was held on Jan 30, 2010 at Bhaikaka Hall. This event was very received well and attended by a large number of technology enthusiasts and a number of TOP speakers from various technologies.

During this event Pinal Dave (myself) and Jacob Sebastian had decided to do something different as the theme was innovation and efficiency. I presented session on SQL Azure, and Jacob presented session on SQL Server R2. This was a bit different than our usual relational SQL Server Presentation. This event was very well received, and we had received great feedback from the attendees. In fact, during Jacob’s session, attendees cheered along with him.

Instead of me writing the review, I am going to share the email/feedback received by attendees here.

Feedback for SQL Azure, which was presented by Pinal Dave:

“The primary attraction of the whole show was the SQL Azure session by Pinal. He was very successful in helping people understand the Azure platform and how SQL Azure fits in the cloud. Though Cloud is often considered as a complicated platform, none of the attendees will agree to that any more. Pinal was able to pull SQL Azure down (from the skies – *cloud*) and put it on the table of common SQL Server developers and Database Administrators.”

Jacob’s session was the most entertaining session of all the sessions in the day. He had very interesting way to present the session. He narrated the story of two people, Sumit Sinhania and Leena Malhotra – one a DBA and the other a Web developer. He went over their struggles, problems and examined how Dacpac helped them to get into a relaxed life.

Feedback for SQL Server R2 – Dacpac, which was presented by Jacob Sebastian: (I have slightly edited this feedback to keep it relevant to subject of SQL)

“I have a story to tell. Once there was a boy named Sumleen who was a student of I.T. Sumleen was very intelligent and eager to learn new things. His life was going well till he joined the college. After joining the college in I.T. branch, Sumleen was so much upset because there were too many things to do and learn. He was confused whether to learn Microsoft technologies or Open Source Technologies. He did not know what to do.

One day a fairy came and she gave Sumleen an email notification from Microsoft about Community Tech Days. He went there to know about current technologies and there he met very good I.T. professionals. But he liked session of Jacob Sebastian the most. Sumleen told me that Jacob was fantastic, and the way he taught was even more fantastic. So on behalf of Sumleen, I thank you for sharing your knowledge with everyone in CTD at Ahmedabad.

Sumleen had one more thing to tell his confusion got resolved and he came to know that Microsoft’s technologies are way better than OpenSource and very advanced. So he decided to dive into it. And he lived happily ever after…..

So this story tells everything about yesterday’s session. And Sumleen is nothing but (Sumit + Leena). And sir, I would like to mention that for the first time, I saw how a technical presentation can be fun with stories…..

We had another great presenter at the event who was Prabhojot Singh Bakshi. He presented the new features of .NET framework, and his session was well-accepted by all the attendees.

Overall, this event was huge success. Thanks Microsoft for giving back so much to community! 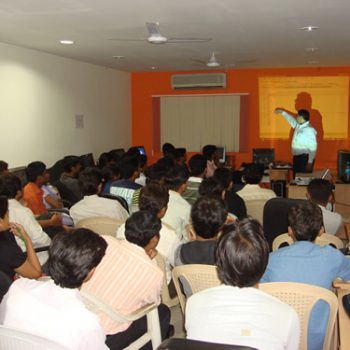