Today, we will examine something very simple and very generic that can apply to hordes of programming languages. Let’s take a common question that is frequently discussed – What is difference between Line Feed (\n) and Carriage Return (\r)?

Prior to continuing with this article let us first look into few synonyms for LF and CR.

Now that we have understood that we have two different options to get new line, the question that arises is – why is it so?

The reason is simple. Different operating systems have a different way of understanding new line. Mac only understands ‘\r’ as new line, while Unix and Linux understand ‘\n’ as new line character. Our favorite OS windows needs both the characters together to interpret as new line, which is ‘\r\n’. This is the reason why a file created in one OS does not open properly in another OS and makes it messy.

Now, let us see how we can create a new line in SQL Server. It is a very simple script yet very useful when we have to do run print something or generate scripts. I have illustrated two examples below that are very easy to understand. In the first example, there are no new line chars inserted and for the same, everything is displayed in a single line. However, in the second example, new line char is inserted and the lines are separated with a new line.

I hope my examples make things more clear to you all. Let me have your feedback on this article.

SQL SERVER – FIX – ERROR : 9004 An error occurred while processing the log for database. If possible, restore from backup. If a backup is not available, it might be necessary to rebuild the log. 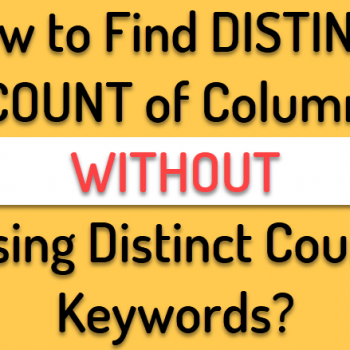 How to Find DISTINCT COUNT of Column Rows Without Using Distinct Count Keywords? – Interview Question of the Week #157