SQL Server physical security aspects are often overlooked. Frequently DB admins focus on the software security and network security, while completely forgetting about the physical server itself. However, the possibility to physically reach the server, will lead to abrogation of all other security configurations that they apply to the software. As far as SQL Server is installed on a physical device, whether it would be server hardware, desktop PC, laptop, or other PC in a data center. The physical security main goal is to prevent someone from gaining access to the machine.

Shared data centers or server rooms provide a wide range of physical and environmental security to ensure that secure areas are protected by appropriate entry controls to ensure that only authorized personnel are allowed access. An appropriate, physical protection should be provided against damage from natural, or man-made disasters, such as fire, flood, explosion etc. All users are required to ensure that systems are not left open to access by intruders to buildings, or by unauthorized colleagues.

If the personnel in the data center is unable to physically lock away the server, you must ensure that all USB ports on the server are disabled. Keep in mind that security is not complete if physical security is overlooked.

The network is the way that external threads may come to attack your SQL Server.

Firewalls provide efficient means to implement security. A firewall is a separator or restrictor of network traffic, which can be configured to enforce your data security policy. If you use a firewall, you will increase security at the operating system.

Every SQL Server instance that is installed on a PC can be considered to be a security domain. Thus, at the instance level you could apply separate security considerations.

I will use the dbForge Studio for SQL Server v 4.0 for the demonstration purposes as it has an excellent tool called Security Manager.

This picture gives us the ability to see how security applies at the instance level. SQL Server Security uses the concept of securables that will be discussed later in this article.

Securables are the objects to which the SQL Server authorization system controls access. For instance, a table is a securable. Some securables can be contained within others, creating nested hierarchies called “scopes”. The securable scopes are server, database, and schema.

An object that receives permission to a securable is called a principal. The most common principals are logins and users.

To control access to securables, a DB admin can grant or deny permissions, or add logins and users to roles that have access.

It is important to note that every individual instance has it’s own set of security considerations. The security folders on each instance contain the same users, application roles,(etc.) folders. However, if we expand the logins folder you can see the different number of accounts. 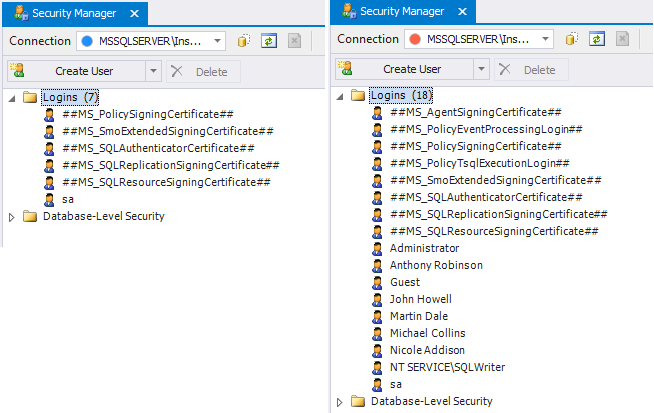 This proves that we can have different security settings for individual users across different instances.

Securables are the resources to which the SQL Server Database Engine authorization system regulates access. Essentially these are the database objects to which you can apply security on your instance of SQL Server. Some securables are standalone and others may be contained within another securable.

Each database also has its own security folder, where we can focus on users, which again, become the logins that we assign the permissions to for our database. 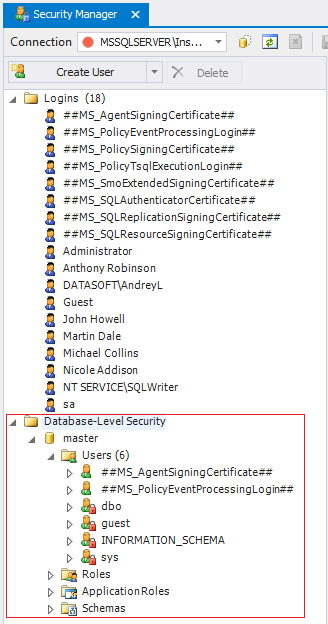 We also have database level roles and application roles. Currently, there are no application roles assigned on this server. There are another components that we do not see in the Database Explorer, however they still exist at the data base level. These components are assemblies which are typically DLL files that are used in the instance of sequel server for deploying functions stored procedures, or triggers. These components are managed by CLR.

You can tune the type of authentication during installation. Windows mode is the most secure, as it relies on Windows accounts as opposed to SQL accounts. The recommended setting is Windows Authentication and it is selected by default. This authentication type simplifies administration and is more secure, because it uses Windows security tokens. There is no need to remember another password, and no password transits through the local network.

There are also default roles created during installation as well. One of which is known as the public role. 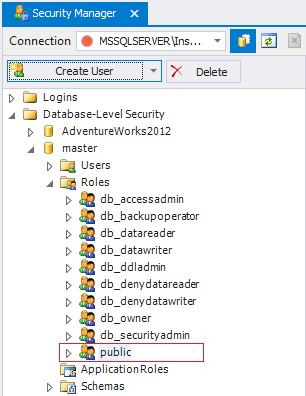 The guest account cannot be dropped, but it can be disabled, through the revocation of the connect permission. User and application access to your SQL Server instance, will be controlled using these security principles.

If you know how to create the logins and user accounts – it is the first step in creating the authentication and authorization model for your SQL Server.

Simply right click the Users folder, and then click New User. This allows us to choose a user type at the database level, as opposed to the server level. We can create SQL user with or without a login, what means that this would be a user name we create specifically in this database. 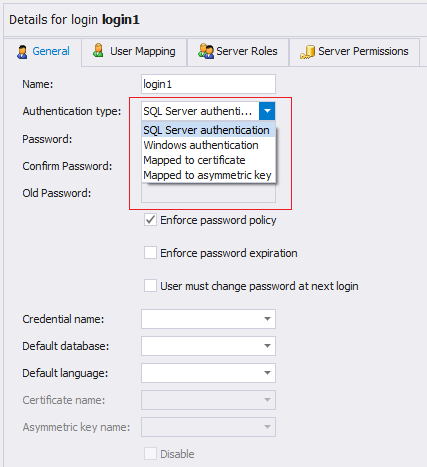 A good example of such an account is the guest account, which is created at the database level, but does not exist at the logins level for the server itself.

You can set the authentication mode to Mix Mode at any time after the installation. And then you can create SQL Server accounts, or use Windows accounts, depending on your choice.

Understanding each type of account and how security is applied to these accounts will help you set the proper security for user access. 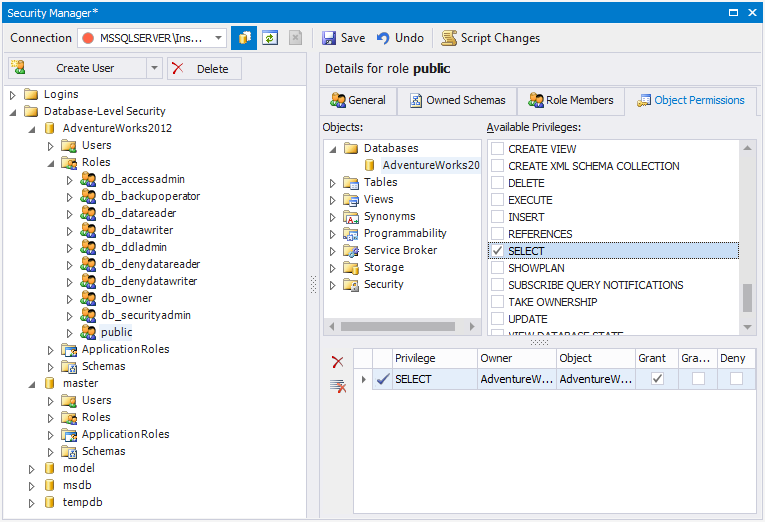 Accessing any of the secureables in SQL Server requires that the login or user have permissions. The permissions in SQL Server follow certain naming conventions. The security check algorithm used by SQL is complex. And the complexity comes from the need to evaluate group or role membership, as well as explicit and implicit permissions.

There are three core elements of SQL Server permission checking: