As December begins the realization is that Year 2014 is about to come to an end. The month of November was a travel month for me. I have travelled to 6 different cities, 2 countries and 3 different conferences presenting and discussing SQL Server. While presenting at this conference I realized that even though SQL Server 2014 has been released for quite a while, the adoption of the product is very slow. There are two main reasons, I figured out regarding why there is not much of the adoption of SQL Server.

Well, here is where the second reason kicks in.

Lots of people complained that there are not enough resources which can teach them SQL Server 2014. There are MSDN and few other website, but there is no real course out there which can walk users with them to upgrade them to the latest version of SQL Server. The lack of good resources out is also one of the reasons for why many organizations are not aware of what SQL Server 2014 has to offer and how it can be justified to upgrade.

Here is the abstract of the course: Every new release of SQL Server brings a whole load of new features that an administrator can add to their arsenal of efficiency. This course takes a tour of the basic new features that were introduced, including backup, security, column store enhancements, Resource Governor, General Administration, Azure integration, extensions with SQL Server 2014 and more.

Here is the image of the actual course page which describes the outline of the course. 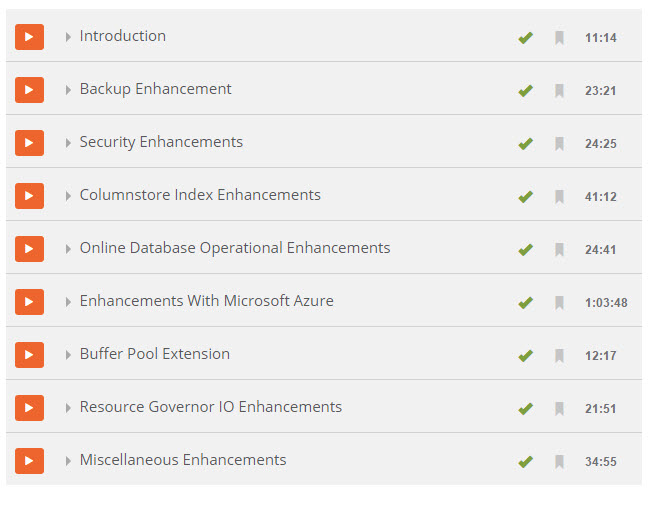 If you are interested in learning this course. Leave a comment and I have few passes for FREE learning of this course which I can share with you. Make sure you have provided your correct email address.