It is totally possible to use JOIN and multiple tables in the DELETE statement. Let us use the same table structure which we had used previously.

Let us see the following example. We have two tables Table 1 and Table 2.


Now let us check the content in the table.

Now pay attention to following diagram. Here we have two tables Table1 and Table 2. Our requirement is that we want to delete those two records from Table1 where Table2 Col3 values are “Two-Three” and “Two-Four” and Col1 in both the tables are the same.

I have explained the above statement very easily in following diagram. 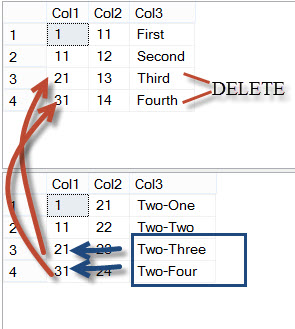 When you look at this it looks very simple but when we try to think the solution, I have seen developers coming up with many different solutions for example sometime they write cursor, table variables, local variables etc. However, the easiest and the most clean way is to use JOIN clause in the DELETE statement and use multiple tables in the DELETE statement and do the task.

Now let us select the data from these tables. 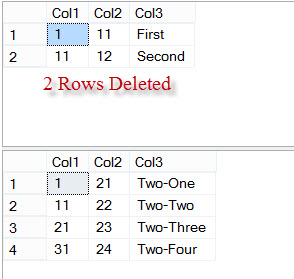 As you can see that using JOIN clause in DELETE statement it makes it very easy to update data in one table from another table. You can additionally use MERGE statement to do the same as well, however I personally prefer this method. Let us clean up the clause by dropping the tables which we have created.

Do let me know if you use any other trick in similar situations. If you do, I would like to learn more about it. 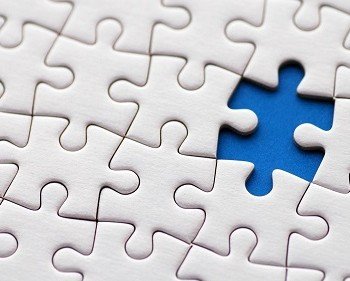