Recently I had an interesting situation during my consultation project. Let me share to you how I solved the problem using Expressor Studio.

To implement this in an ETL application, you probably would have hard-coded a type conversion function call, such as:

That wasn’t so bad, was it? For this instance, programming this hard-coded type conversion function call was relatively easy. 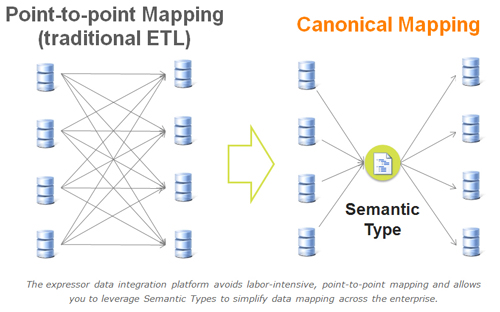 However, hard-coding, whether type conversion code or other business rule code, almost always means that the application containing hard-coded fields, function calls, and values is: a) specific to an instance of use; b) is difficult to adapt to new situations; and c) doesn’t contain many reusable sub-parts. Therefore, in the long run, applications with hard-coded type conversion function calls don’t scale well. In addition, they increase the overall level of effort and degree of difficulty to write and maintain the ETL applications.

To get around the trappings of hard-coding type conversion function calls, developers need an access to smarter typing systems. Expressor Studio product offers this feature exactly, by providing developers with a type conversion automation engine based on type abstraction. 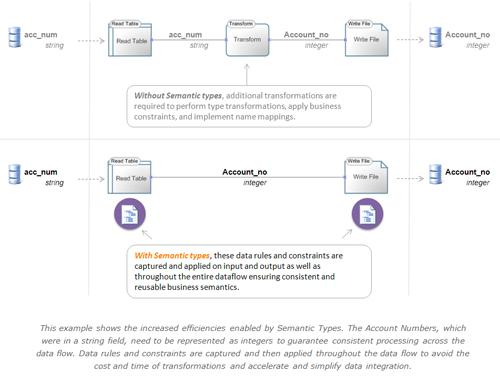 The theory behind the engine is quite simple. A user specifies abstract data fields in the engine, and then writes applications against the abstractions (whereas in most ETL software, developers develop applications against the physical model). When a Studio-built application is run, Studio’s engine automatically converts the source type to the abstracted data field’s type and converts the abstracted data field’s type to the target type. The engine can do this because it has a couple of built-in rules for type conversions.

So, using the example above, a developer could specify customer_identifier as an abstract data field with a type of integer when using Expressor Studio. Upon reading the string value from the text file, Studio’s type conversion engine automatically converts the source field from the type specified in the source’s metadata structure to the abstract field’s type. At the time of writing the data value to the target database, the engine doesn’t have any work to do because the abstract data type and the target data type are just the same. Had they been different, the engine would have automatically provided the conversion.

How to Generate Fibonacci Series for the First 1000 Values? – Interview Question of the Week #174