In yesterday’s blog post we learned the importance of the Cloud in the Big Data Story. In this article we will understand the role of Operational Databases Supporting Big Data Story.

Even though we keep on talking about Big Data architecture, it is extremely crucial to understand that Big Data system can’t just exist in the isolation of itself. There are many needs of the business can only be fully filled with the help of the operational databases. Just having a system which can analysis big data may not solve every single data problem.

Think about this way, you are using Facebook and you have just updated your information about the current relationship status. In the next few seconds the same information is also reflected in the timeline of your partner as well as a few of the immediate friends. After a while you will notice that the same information is now also available to your remote friends. Later on when someone searches for all the relationship changes with their friends your change of the relationship will also show up in the same list. Now here is the question – do you think Big Data architecture is doing every single of these changes? Do you think that the immediate reflection of your relationship changes with your family member is also because of the technology used in Big Data. Actually the answer is Facebook uses MySQL to do various updates in the timeline as well as various events we do on their homepage. It is really difficult to part from the operational databases in any real world business.

Now we will see a few of the examples of the operational databases.

We have earlier discussed about the RDBMS role in the Big Data’s story in detail so we will not cover it extensively over here. Relational Database is pretty much everywhere in most of the businesses which are here for many years. The importance and existence of the relational database are always going to be there as long as there are meaningful structured data around. There are many different kinds of relational databases for example Oracle, SQL Server, MySQL and many others. If you are looking for Open Source and widely accepted database, I suggest to try MySQL as that has been very popular in the last few years. I also suggest you to try out PostgreSQL as well. Besides many other essential qualities PostgreeSQL have very interesting licensing policies. PostgreSQL licenses allow modifications and distribution of the application in open or closed (source) form. One can make any modifications and can keep it private as well as well contribute to the community. I believe this one quality makes it much more interesting to use as well it will play very important role in future.

Though above all of the properties are interesting to have in any NoSQL database but the one which most attracts to me is Eventual Consistency.

RDBMS uses ACID (Atomicity, Consistency, Isolation, Durability) as a key mechanism for ensuring the data consistency, whereas NonRelational DBMS uses BASE for the same purpose. Base stands for Basically Available, Soft state and Eventual consistency. Eventual consistency is widely deployed in distributed systems. It is a consistency model used in distributed computing which expects unexpected often. In large distributed system, there are always various nodes joining and various nodes being removed as they are often using commodity servers. This happens either intentionally or accidentally. Even though one or more nodes are down, it is expected that entire system still functions normally. Applications should be able to do various updates as well as retrieval of the data successfully without any issue. Additionally, this also means that system is expected to return the same updated data anytime from all the functioning nodes. Irrespective of when any node is joining the system, if it is marked to hold some data it should contain the same updated data eventually. 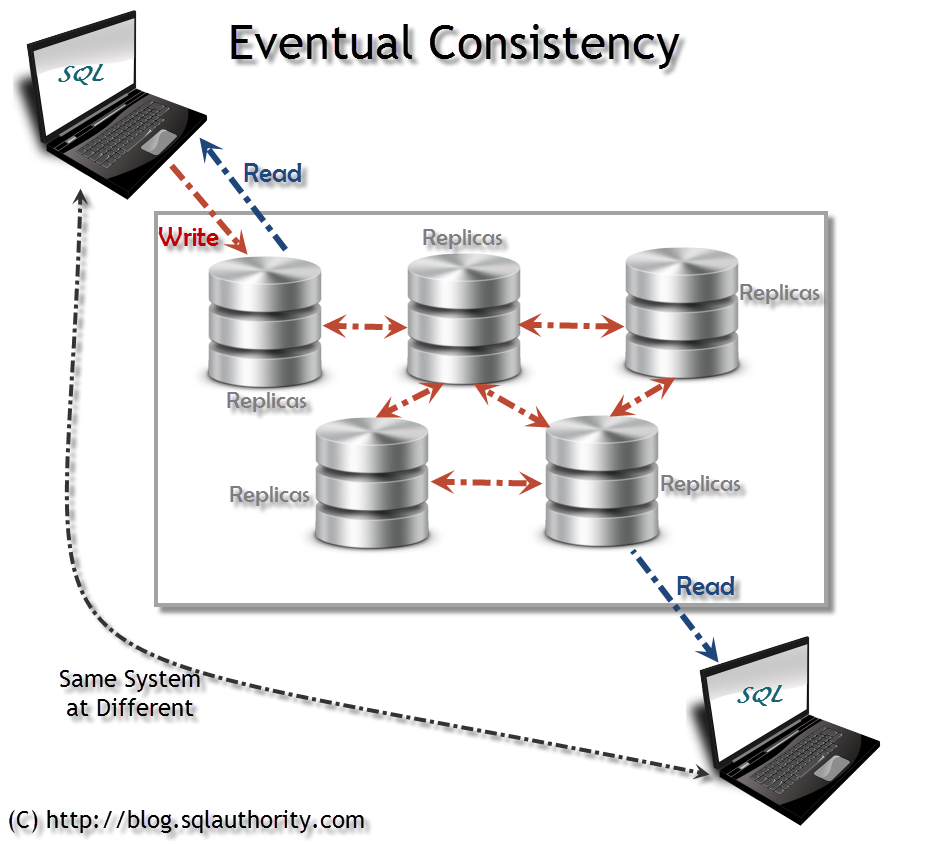 As per Wikipedia – Eventual consistency is a consistency model used in distributed computing that informally guarantees that, if no new updates are made to a given data item, eventually all accesses to that item will return the last updated value.

In other words –  Informally, if no additional updates are made to a given data item, all reads to that item will eventually return the same value.

In tomorrow’s blog post we will discuss about various other Operational Databases supporting Big Data.